As a special case of fluorescence microscopy, multiphoton microscopy uses nonlinear optical effects to limit fluorescence excitation to the focal point only. This leads to an improved resolution. Another advantage of this technique is the higher penetration depth into the sample by long-wavelength light and a strongly reduced bleaching of the fluorescent dyes. 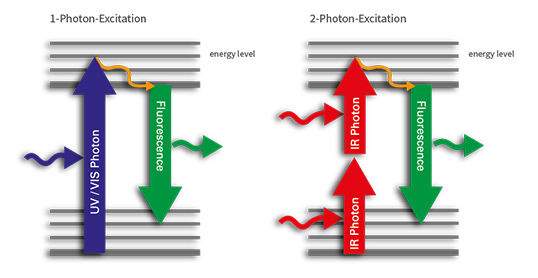 To generate the necessary nonlinear optical effects, short fs pulses with high peak powers are required to produce a sufficiently high photon density in the sample at the focal point. Thus, two or more photons are absorbed simultaneously, exciting a higher energy level. In contrast to normal fluorescence microscopy, the fluorescence light has a much shorter wavelength than the excitation light. Due to the nonlinear excitation, a pinhole is not necessary to filter light outside the focal point, since only in the focal point high enough intensities excite fluorescence.

Finally, the focal point scans over the sample with a scanner and the computer assembles all the images into one image.

The most common variant is excitation with two photons. For this 2-photon microscopy, the excitation wavelengths 920 nm and 1064 nm have become established, so many users limit the commonly used tunable titanium:sapphire lasers to these wavelengths. Therefore, fixed wavelength femtosecond fiber lasers, which are specifically designed for 2-photon microscopy and are thus optimally matched to the application, have been gaining acceptance in recent years. These lasers are not only less expensive and more compact than titanium:sapphire lasers, but are also virtually maintenance-free.

Especially in neuroscience, multiphoton microscopy has become an important technique. In many cases, this application is combined with a second laser that can specifically excite or deactivate neurons (optogenetics).

Back to the Application Biophotonics

Our experts are here to help you